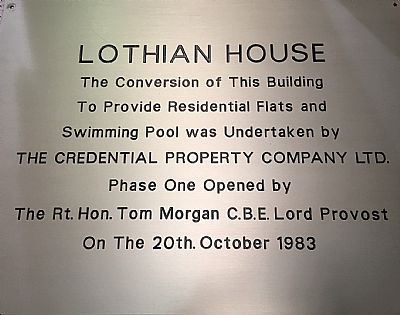 Lothian House was converted from offices into 88 exclusive private flats in 1982-1983, and a swimming pool area and recreation faciillities were developed in the basement.

With the passage of time, the Lothian House basement leisure facilities became run down and eventually they were closed late in 2014 as they were in need of full refurbishment. The renewal process included the facilities being used as a teaching project for final year design students at the nearby College of Art.  Meanwhile, the LHPA commenced a long consultative process with all of the owners and a Feasibility Study was undertaken by architects. This study determined that, whilst it was feasible to refurbish these facilities with highly desirable design options being offered, regrettably the cost was beyond the reach of the Lothian House proprietors at that time.

As a result of this, the LHPA eventually decided to proceed with a lower cost project, designed and managed by volunteers from within the LHPA. The LHPA appointed a volunteer Project Manager, a specially constituted Basement Steering Group was established and a willing group of volunteer helpers were enlisted to work, as needed, alongside the many professionals involved with this massive project. It was particularly notable that these professionals, and staff from the City of Edinburgh Council Building Control, provided encouragement, expertise and guidance to the volunteers, to help ensure that the premises were refurbished to the highest possible standard. Completion of this complicated project was a huge achievement for the LHPA and was followed by considerable celebrations!

The Opening Ceremony of the newly refurbished Lothian House Leisure Suite was held on Saturday 28 September, 2019, during which Frank Ross, The Rt Honourable Lord Provost of the City of Edinburgh, officiated and complimented the LHPA upon what had been achieved by our community effort.  This official event was followed by a celebratory party that evening for owners, friends, family and neighbours, with another party the following day to thank the professionals who had helped throughout this project.  A good time was had by those attending!

The Leisure Suite is now run by the LHPA as a domestic Private Members Club, with Category 1 membership exclusively restricted to owners and their friends and family; whilst Category 2 membership allows long stay tenants within Lothian House to also join and use these facilities if they meet the stipulated conditions. As these are not commercial facilities, holidaymakers and short stay visitors to Lothian House are not permitted to use the Leisure Suite.